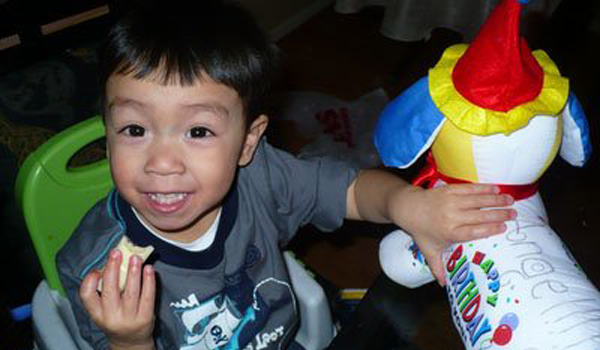 Sunday, August 9, was like every other Sunday. We got up, had breakfast and went to Mass. It was a beautiful day. Hot, sunny, no clouds. After church, the kids (Angel, 2.5, Hanna, 4, and Maire-Kate, 10) had leftover pizza for lunch and I got the little ones ready for a nap.

I was finishing laundry so I could take the kids to the park. The next time I saw Angel, (about 20 minutes later) he was dead. He had hanged himself on a cord from the window blind in his bedroom. I knew the cords were dangerous. I had the blinds in the raised position so they wouldn’t get their heads caught in the slats if they looked out the window. The cords were tied at the top of the window that I thought the kids couldn’t reach. Hanna later told a police detective that she reached the cord by climbing on a dollhouse and standing on the window sill to pull the cord down. The cord came down tangled creating the loop that strangled Angel. They were pretending it was a zip line like the cartoon character, Go-Diego-Go, uses on tv. I’ll never forget Hanna coming to me and saying “Angel is sleeping in the window and his has this thing on his neck”. I ran screaming into the room. I remember pulling the cord from his neck and screaming his name. He wasn’t blue. His eyes were half open. For a second, I thought it just happened and he’d be okay. I shook him and screamed “Angel!! Angel!!” but he didn’t wake up. His arm brushed against mine when I shook him and it was cool. His lips were pale. I carried him to the living room and did CPR while my older daughter called 911. The paramedics were able to get a heartbeat but he had significant brain damage. His bio Mama “P” was away for the weekend. I think Angel held on for her so she could say goodbye. Angel was taken off life support on Tuesday morning.

After his death, child welfare didn’t require other foster parents to take their blinds down. They called Angel’s death a tragic accident. I emailed every child welfare office in the state and told them Angel’s story. Then I emailed the governor and told him that IF another child died, I was going to make sure the state of Maryland was held responsible. Before Angel’s death, they could claim ignorance. Now they know the danger. When the governor’s office didn’t take action, I contacted every delegate and senator in my state and told them Angel’s story. They were sympathetic but didn’t think there needed to be legislation. Every time another child died, I emailed them and said “Okay, another child died on 9/11. That makes 9 this year. How many more? Just tell me how many kids have to die before you do something? 11? 17? 104?” After that last email, my local delegate, Kirill Reznik, said he went home and took a look at the blinds in his own window. He then realized he had to do something. Along with Senator Nancy King, Del Reznik introduced legislation to ban cords in foster homes, daycare homes and daycare centers. The law is named after the baby: Angel’s Law. And it took effect on October 1st 2010.

The memories of that day can still take my breath away and leave me feeling sick but they don’t consume my every moment like they did in the beginning. I still, after 22 months, can’t believe that “dead” is a word that describes my little boy. People tell me that Angel’s life had meaning. His law will save other kids. He fulfilled his purpose. He’s happy in heaven. But those things don’t make me feel better. I want him-not a law. There is nothing is this world that anyone can give me that would make up for what I’ve lost. It’s just so unreal. Learning to live without him has been horrific but I’m still here. The pain comes in waves -sometimes it’s unexpected and takes me by surprise. Some days, everything I see brings him to mind: “What a pretty flower. Does he see those in heaven? He would have loved that playground. He should be playing with Hanna on the swings.” And when the weather is hot and sunny, it’s especially hard. I hate summer. I can see the beauty in it but I just hate it. I count the days until it’s over. It’s full of memories, full of ‘what if’s’ and ‘why didn’t I’s’.

The condo association wanted all the windows to have white or off white mini blinds. I wish I had just taken the blind down to begin with. I didn’t cut the cord. It never even occured to me to take a scissors and just cut the cord off.I was going to change Angel’s name after he was adopted. Angel’s birthname was “Angel Vo”. “Vo” is Vietnamese for the mythical bird, the Phoenix-which rose to a new life from the ashes of death. I had no idea how fitting his name would be.