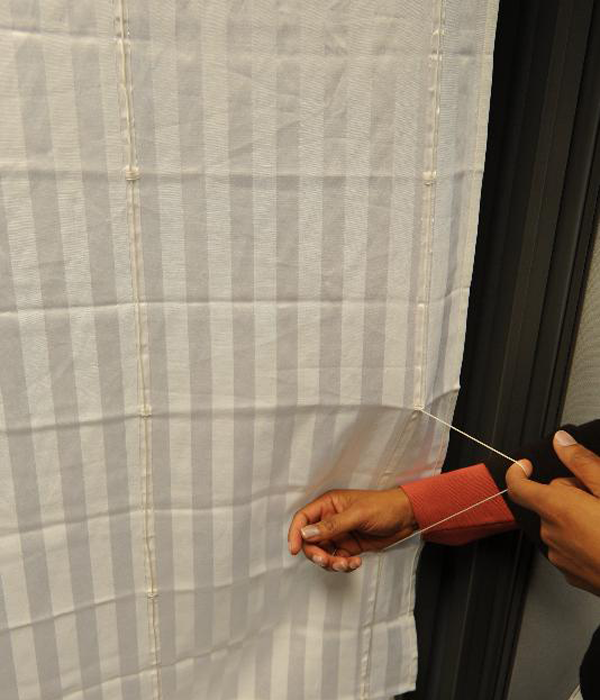 If you have turned on the television within the last few days, you probably saw this massive recall announced by the CPSC on Tuesday.

Before I get into what the recall really means, I wanted to clear up some facts that the media is not informing the public.

This is NOT a pull cord issue.  Parents tied up the pull cords, the child created a loop within the product (the inner cords) and strangled on it.  It seems that many folks after reading the news releases are still confused why these shades are so dangerous.  Here is a good picture.  See how the string can be pulled away from the fabric?  This is where the child sticks his/her head.

How many children have died from cords?
The CPSC has record of 367 window cord strangulation deaths since 1981. The injuries might be higher than this number but many go unreported.  It is hard to measure that. Of the 367 that have died, 8 of children died on Roman Shades or Roll up shades.

When you read the number 8 you are only seeing the number of deaths on products that are specifically being recalled which is Roman Shades and Roll Up shades with cords.

The numbers are as follows.

Since 1981-2009 367 deaths on all corded window covering products.  The main culprit being horizontal window blinds.  Other deaths include drapery cords, cellular shades, and continuous loop shades with tie down devices that were faulty.

Since the 2000 retrofit recall which involved placing inner cord stoppers on the cords of window coverings, 103 children have strangled to death on various corded window covering products.  More children have strangled on corded window blinds than any other product.  The area’s within the product that children strangle on are pull cords with separated tassels  that were tangled together, the inner cord with and without inner cord stoppers, and one single cord being wrapped around the child’s neck.

What do these numbers mean?
It means that in the past 2 decades the death rate has not decreased.  This is why we as a Non-Profit advocate using no cords in homes, daycares, or military housing.  Even with “retrofit” kits attached, children still can strangle on other areas of the product.  Reports show that after parents have taken safety precautions such as tying up pull cords, making the cords shorter and attaching retrofit devices children have still found a way to strangle to death.

What do the recalls really mean?
Out of the many retailers who sold these shades, only one is offering money back. West Elm in San Francisco is offering a merchandise store credit and they will come get your shade from your home.  Kudos to you West Elm!

The other retailers/manufactures are expecting YOU to remove the cords from the products.

Call the WCSC for free repair kits 1-800-506-4636.  If you do receive a repair kit, email us and let us know how long it took to get to you.  We are hoping to see a video showing consumers exactly how to remove the cords from the window coverings. We hope to see a video from the CPSC or from the WCSC sometime soon.  Otherwise, we will just have to make our own.  There will be instructions in the safety kit that will instruct consumers how to remove the cords from the Roman Shades. However, we feel video will clear up any confusion.

The Roll-Up Shades also have repair kits.  We DO NOT recommend these repair kits because pull cords on the product can strangle children.  We recommend that parents remove roll up shades from the home and replace it with a cordless product.  In the picture to the right, the bottom arrow shows you the area where children can slip the cord off the side of the product and put their head through the loop.  When the retrofit kit is installed, the loop will break off from the top of the shade if pressure is put on it.  The top arrow is pointing to the pull cords.  These are NOT break away.  They can still get tangled together and form a loop or one cord can be wrapped around a child’s neck.  These are the reasons why PFWBS does not recommend roll up retrofit kits.

Below are just a few links to videos and articles about the recall.  Please pass these along to your friends and loved ones who have children.  Everyone is busy this time of year and I am sure millions have no idea that there was a recall.

Thanks so much for your support and have a safe and Merry Christmas!